#TIFF19 is quickly approaching, and so are the NKPR IT House x Producer’s Ball festivities! Last year we partnered with Rolling Stone magazine and so many stars stopped by for a portrait session. This year, we’re so excited to be partnering with Rolling Stone again! In honour of that, we wanted to share 10 of our favourite portraits from #NKPRIT18.

Earlier this week, the Thompson Toronto held a Film Fest inspired cocktail event on the stunning rooftop. Bartenders served creative cocktails inspired by movies that will be at #TIFF19. Scroll down to see some of the cocktail creations and stop by during TIFF to sip your own!

After wrapping up yet another successful Festival Countdown…we wanted to share a behind the scenes look of everything that goes into the making of this film fest kick-off party! Check out the video, as well as some images from the event below.

With the Toronto International Film Festival around the corner, we asked some of the NKPR team which films they’re looking forward to seeing! From the story of Harriet Tubman, to Mr. Rogers, to Jennifer Lopez playing a stripper, it’s bound to be an exciting festival! Keep reading below for our picks!

Last month it got very festive at the NKPR office in Toronto and at The Ritz-Carlton Montreal for our annual Holiday in July! Our media friends checked out everything cool for the upcoming holiday season. Scroll down for a peek of the products that will get you excited for that holiday wish list!

OUR TOP 5 TAKEAWAYS FROM THE F WORDS WITH DAX DASILVA

Lightspeed and Never Apart founder Dax Dasilva joined Natasha, Anthony and Taylor on The F Words to discuss his new book Age of Union and some of its intriguing points. Here are the top five things you should know from the podcast courtesy of Dax himself.

#1: Age Of Union was written to help people stop thinking of themselves through their projects. Dax says, “building yourself as the best instrument to take your projects to where they need to be will ignite the flame inside you.”

#2: Dax describes our souls as under nourished. “The soul will burn down to its embers, but will never fully extinguish. When we nourish the soul with things that benefit our personal development, the flame inside us grows.”

#3: Everyone has the responsibility to take care of their body, Dax says. “Your physical health works with your mental health in bettering yourself to become the best instrument you can be.”

#4: Dax insists taking some ‘me’ time is key. “Take time out of your week to leave work aside and do something that is just for the soul. These are the acts that connect you to a greater purpose.”

#5: Last but not least, Dax says “when you have pure intentions about things, it gives you clarity!” We couldn’t agree more.

Listen to the full podcast here!

The biggest names in Canadian film and television came together in Toronto last night for the 7th Annual Canadian Screen Awards. Some of the winners included: Schitt’s Creek for Best Comedy Series, Anne with an E for Best Drama Series, The Amazing Race Canada for Best Reality Series, Catherine O’Hara for Best Actress in a Comedy Series, and Jared Keeso for Best Actor in a Comedy Series. Deepa Mehta received the Lifetime Achievement Award, Kids in the Hall were recognized with the Academy Icon Award, Stephan James took home the first ever Radius Award and Mary Walsh accepted the Earle Grey Award.

Backstage the stars got their pose on for celebrity photographer George Pimentel in the CSAs’ golden portrait studio. Here’s a look at some of the sparkling shots!

Last week Square One hosted media and influencers for a preview of their upcoming Food District, opening to the public on April 1st.  The ultimate influencer, the Food God, Jonathan Cheban was on hand to experience all of the deliciousness.

Guests sampled appetizing eats, coffee, juice and beer from some of the merchants and restaurants that will be part of The Food District. Take a look below and prepare to get hungry.

Details of a grand opening event are coming soon!

Backstage at the Oscars

The lead up to this year’s Oscars may have been shrouded in controversy (Kevin Hart dropping out as host because of homophobic tweets and the Academy reversing their decision to hand out awards in commercial breaks), but the biggest night in movies still delivered some standout and historic moments. All eyes were on Lady Gaga and Bradley Cooper during their intimate performance of their Oscar winning song Shallow, Hannah Beachler and Ruth E. Carter made history becoming the first African-American women to win Oscars in their categories (Production Design & Costume Design for Black Panther), Mahershala Ali is now the first African-American actor to have won two Best Supporting Actor trophies, and Billy Porter turned heads when he stepped onto the red carpet in a tuxedo gown.

There were also plenty of moments that happened backstage that you didn’t see on TV.

After winning for Best Original Song Lady Gaga got emotional with her co-writers Mark Ronson and Anthony Rossomando.

Rami Malek also hit the portrait studio after taking home the Best Actor trophy for his portrayal of Freddie Mercury in Bohemian Rhapsody.

J.Lo (who looked like a stunning human disco ball in Tom Ford) checked herself out in the mirror before heading to the stage.

When it came to Julia’s bump-in with Paul Rudd, the hashtag says it all…

The Daily Show host Trevor Noah caught this candid moment of Spike Lee preparing some notes in case he had to accept an award. Spike ended up taking home the Oscar for Best Adapted Screenplay for his film BlacKkKlansman.

Jennifer Hudson was left pretty much speechless while meeting Bette Midler for the first time.

And Melissa McCarthy spoofed the bunny loving Queen from the nominated film The Favourite, and really got into character.

Take a Look Inside Kindness HQ

On Valentine’s Day NKPR’s Toronto office was transformed into Kindness HQ for our 4th annual 26 Hours of Kindness.

Over 60 volunteers, made up of our staff, local neighbours and friends, came together to pack lunches for Toronto’s homeless as part of the #hashtaglunchbag initiative. 650 sandwiches were assembled and then packed into bags with juice boxes, fruit and notes of kindness. The lunches were distributed to St. Felix Centre (Liberty and Augusta locations), Ve’ahavta, The Scott Mission and Good Shepherd Ministries.  A huge thank you to Brodflour, The MRG Group, Phil’s Produce, Jonny Kim, Chef Romain Avril and Fiera Foods for donating the food.  Here’s a look at how the day unfolded. 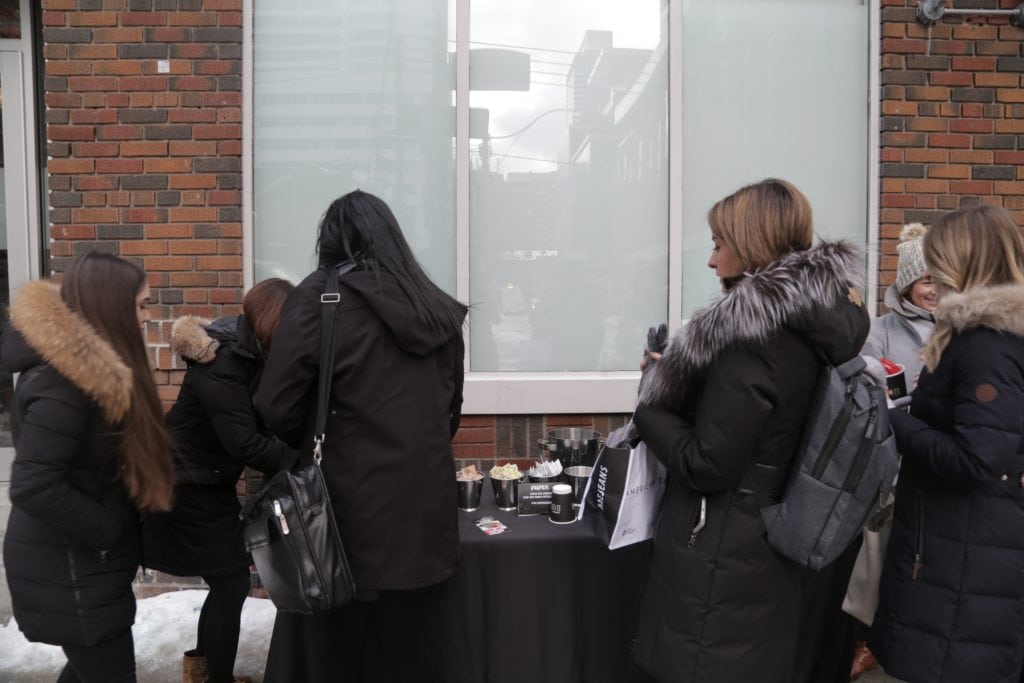 Commuters on Adelaide picking up coffees (courtesy of Thompson Toronto) outside Kindness HQ. 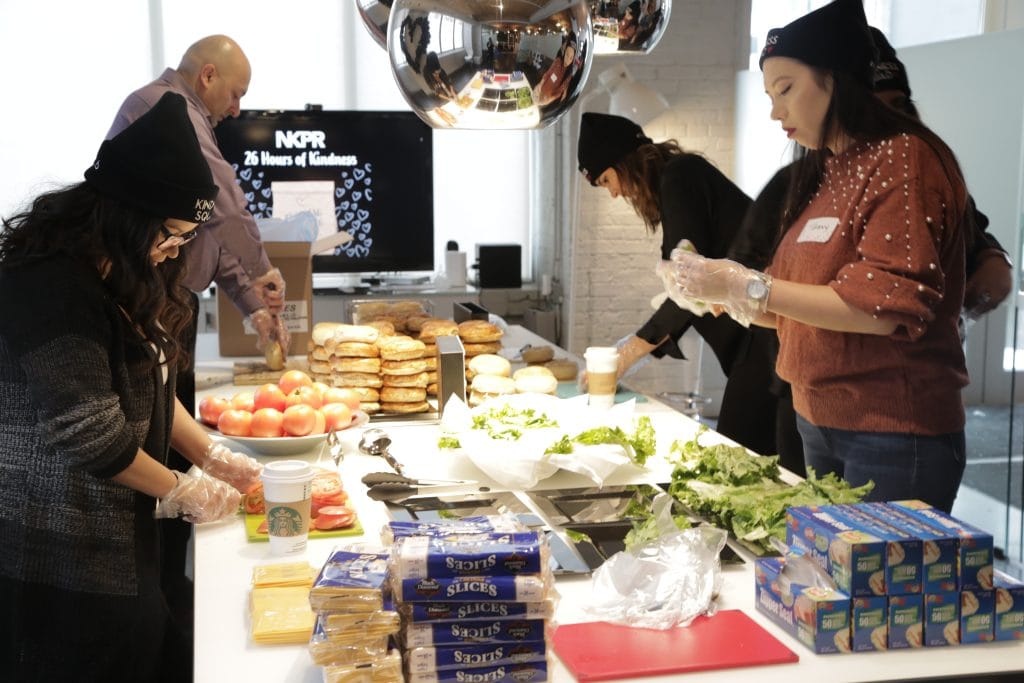 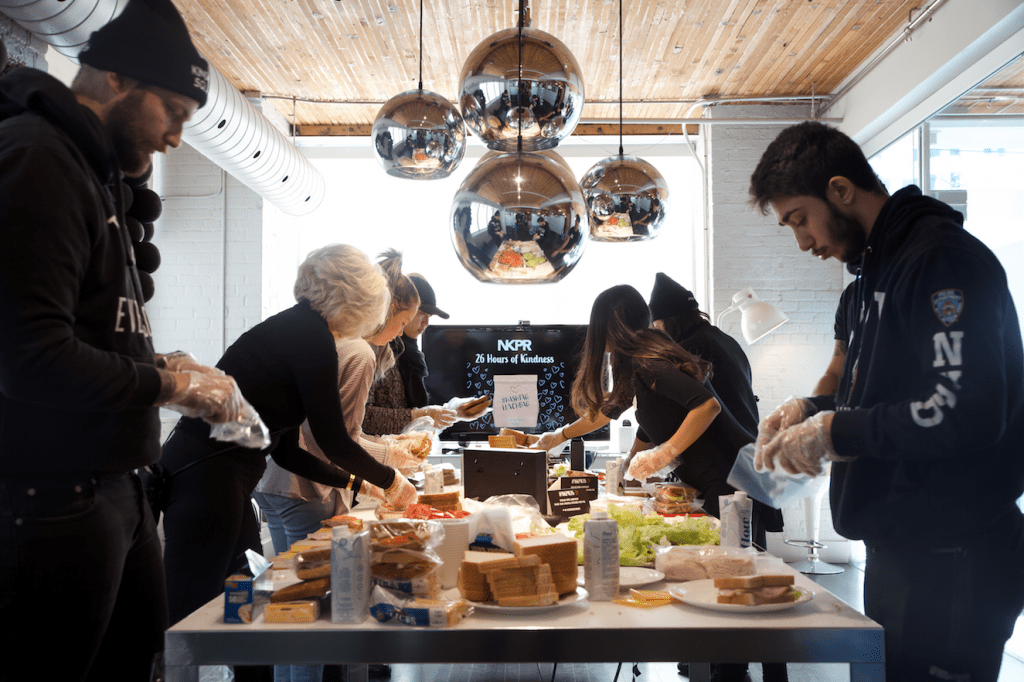 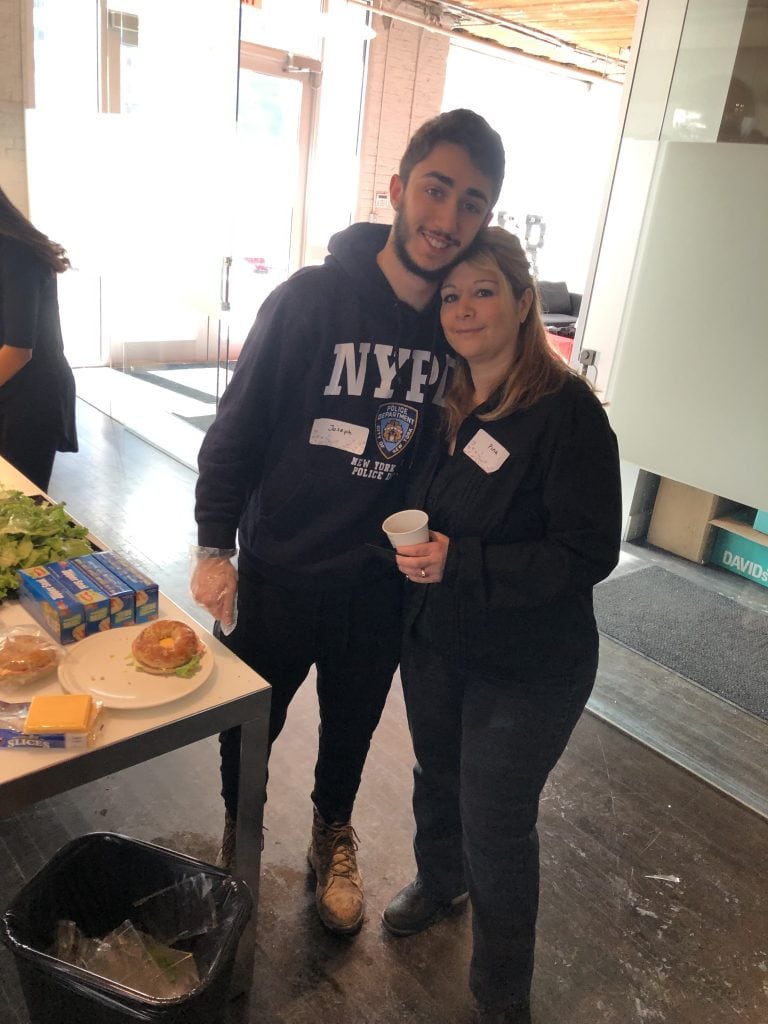 Hundreds of sandwiches being assembled by our awesome volunteers! 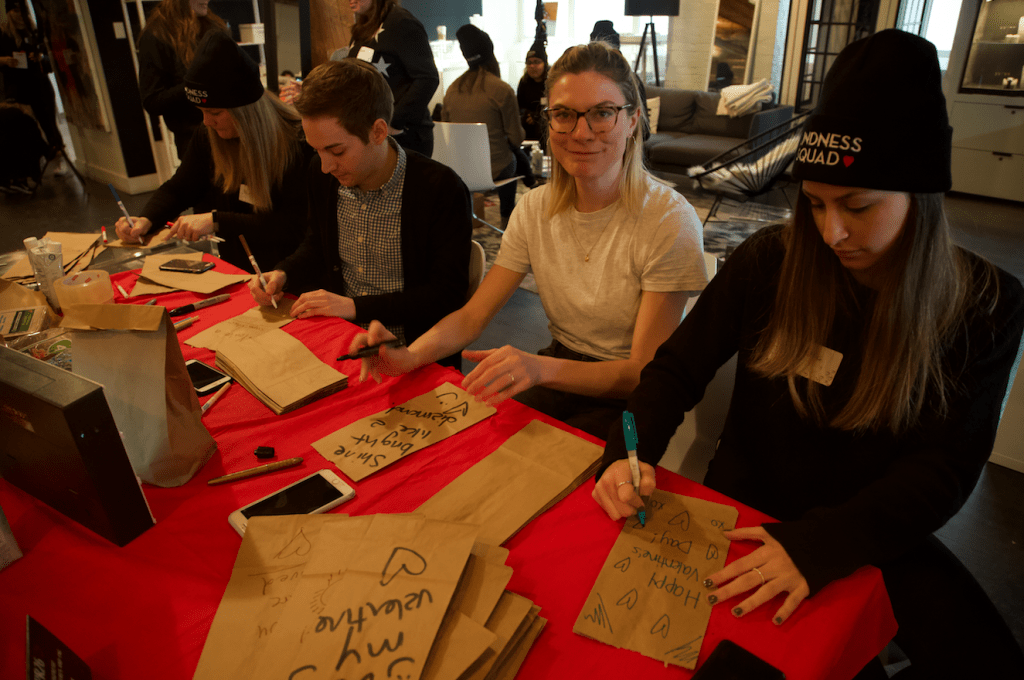 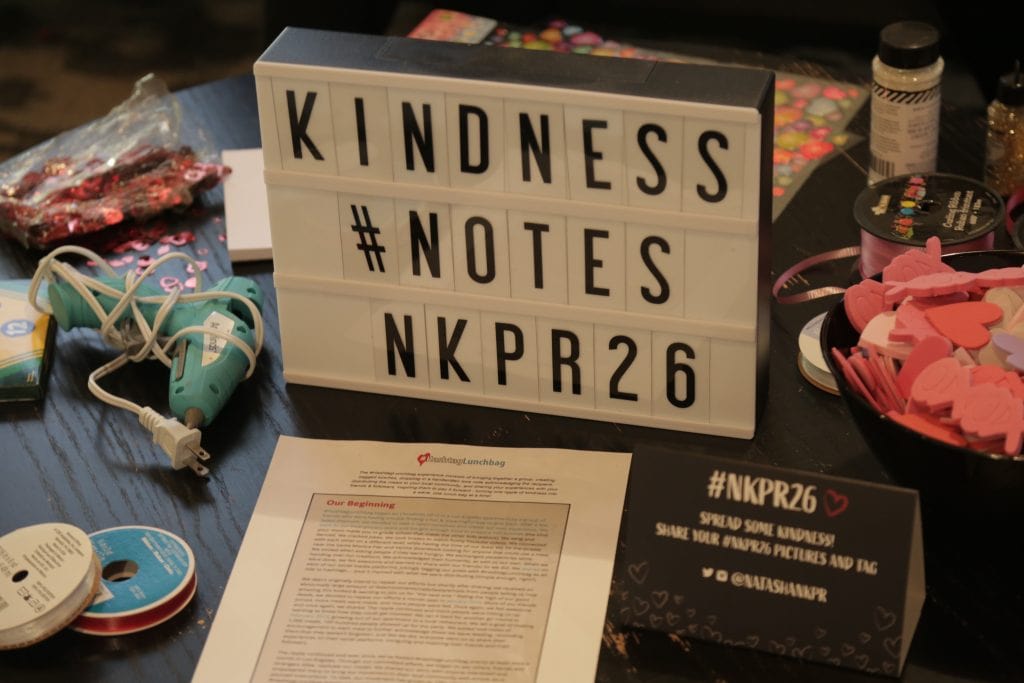 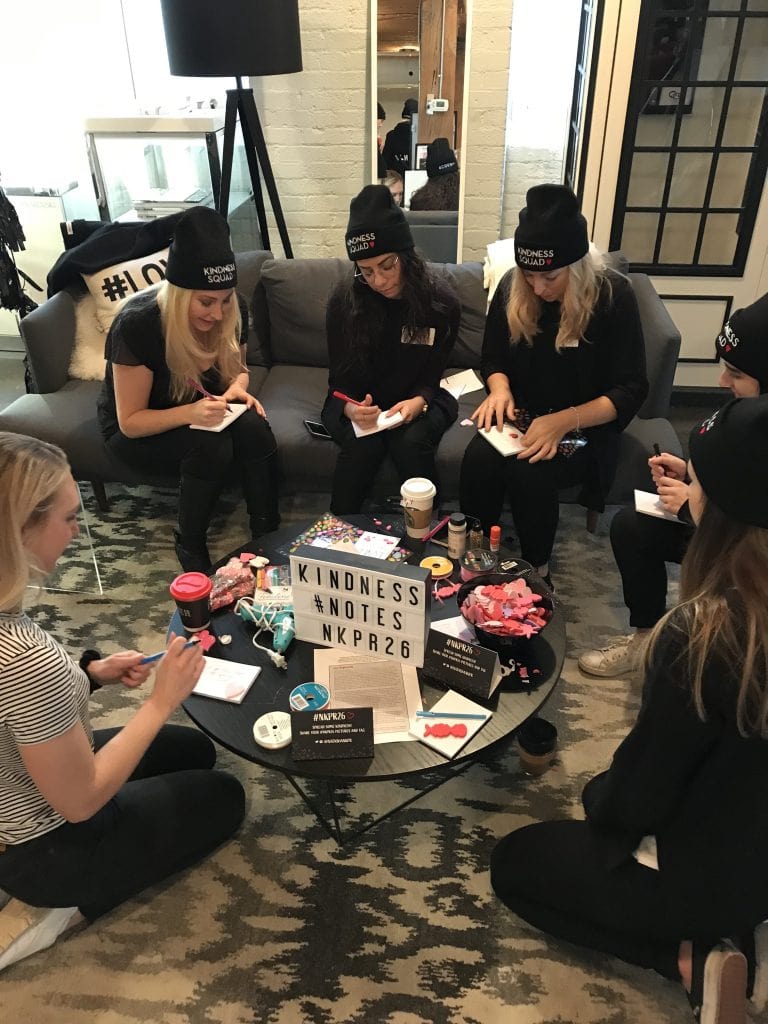 Beautiful notes of kindness were written on lunch bags and on pieces of paper that were put into the lunch bags. 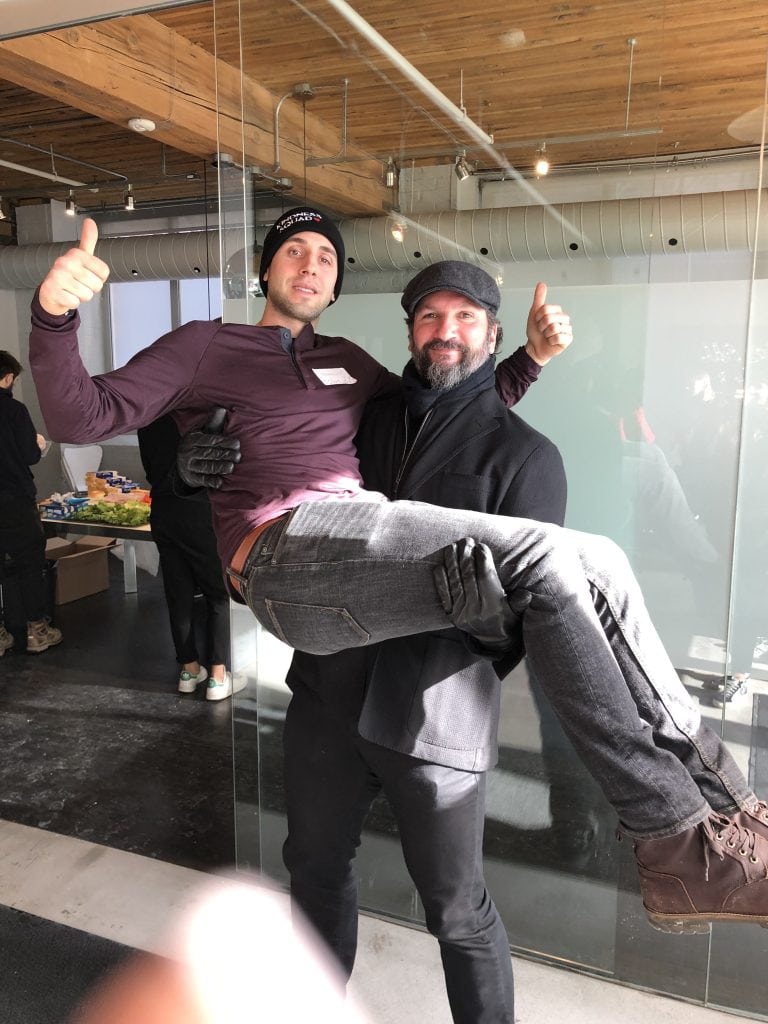 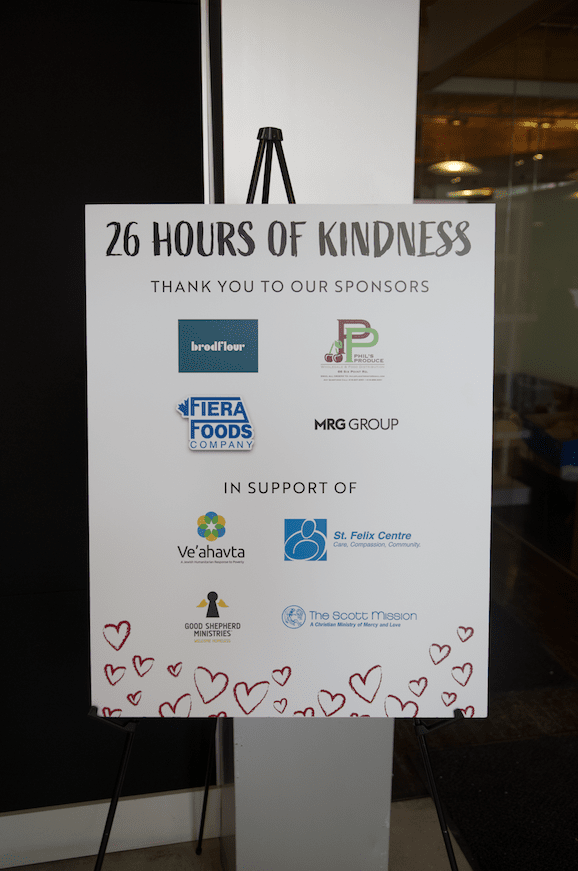 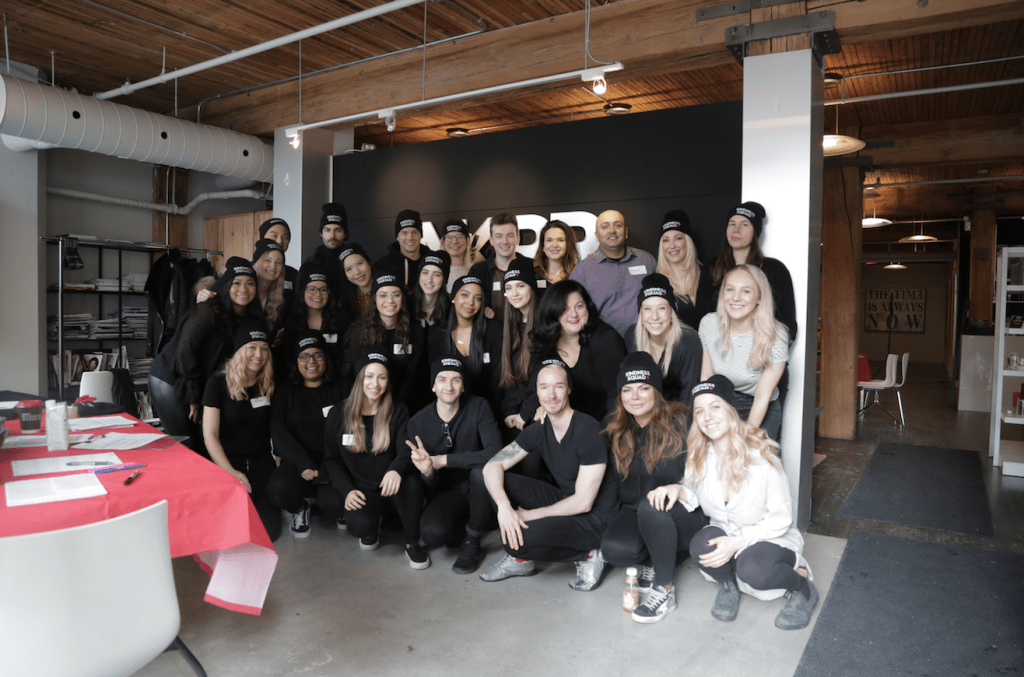