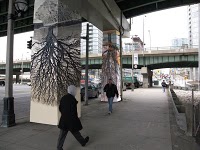 The 2008 installment of the CONTACT Toronto Photography Festival experienced its most successful year ever. Photographers from Canada and all over the world transformed Toronto into a spontaneous at gallery. From the airport to Queen Street, the city served as a “frame” to the largest photography festival in the world.