As the annual Toronto Film Festival kicked off on September 6th, so did our annual ITHouse x Producers Ball! The Live Nation Lounge in Liberty Village was brought to life with inspiring activations from Lise Watier, Swarovski, and Hounds Vodka. Guests were encouraged to take part in a Rolling Stone photobooth which gave every individual their chance at being on a “Rolling Stone Magazine Cover.” Each day also featured a curated panel focusing on either the “The Art of the Short”, Music and Film, or Swarovski’s panel on Fashion and Film.

The activations were set up to provide each person with the perfect glam and glitz. Guests could stop by the Lise Watier makeup artists who provided touch-ups throughout the day. Lise Watier eyeshadow palettes were studded with guests initials and there was even the chance for an old school polaroid in front of an old-school microphone. Silver and glitter filled the area and individuals were encouraged to get dolled up to be picture ready at any moment.

The Swarovski activation was adorned with jewels on every surface with vintage furniture and chars filling the space to create an old-school photoshoot. Guests gathered to try on the most extravagant pieces to go with their TIFF outfits and get the perfect photo to capture the fun!

Hounds Vodka had a special bartender set up serving the Bloodhound and the Black Tonic cocktails for everyone to enjoy. The black vodka created the perfect infused refreshments for the day. And Natasha got her own chance at bartending as she got behind the bar to mix and measure the delicious concoction for guests to try.

Ben Ayres tried his first Hounds Vodka and was pleasantly surprised by the fusion of flavours and was even happier when he found that Tim Horton’s Anytime Breakfast was being served to munch on as he enjoyed the day!

The second morning was filled with interviews behind-the-scenes with Drew Scott, jumping around to parts of the ITHouse- including a mid-interview game of ping-pong with CP24 Breakfast’s Bill Coulter!

On Friday, Canadian legends The Barenaked Ladies stopped by! The band was seen mingling with friends, and even enjoying FLOW and Nomz organic between visits to get touch ups from Lise Watier!

Karl Wolfe and London Brown also made a pit stop in the afternoon. They both had lively energy that kept everyone laughing as they posed for photos in The Rolling Stone Photobooth and with the Lise Watier stage! And the day wasn’t over until the sweet Jacob Tremblay stopped by. He expressed his love of Tim Horton’s doughnuts and of course took advantage of the life-sized games throughout the afternoon! 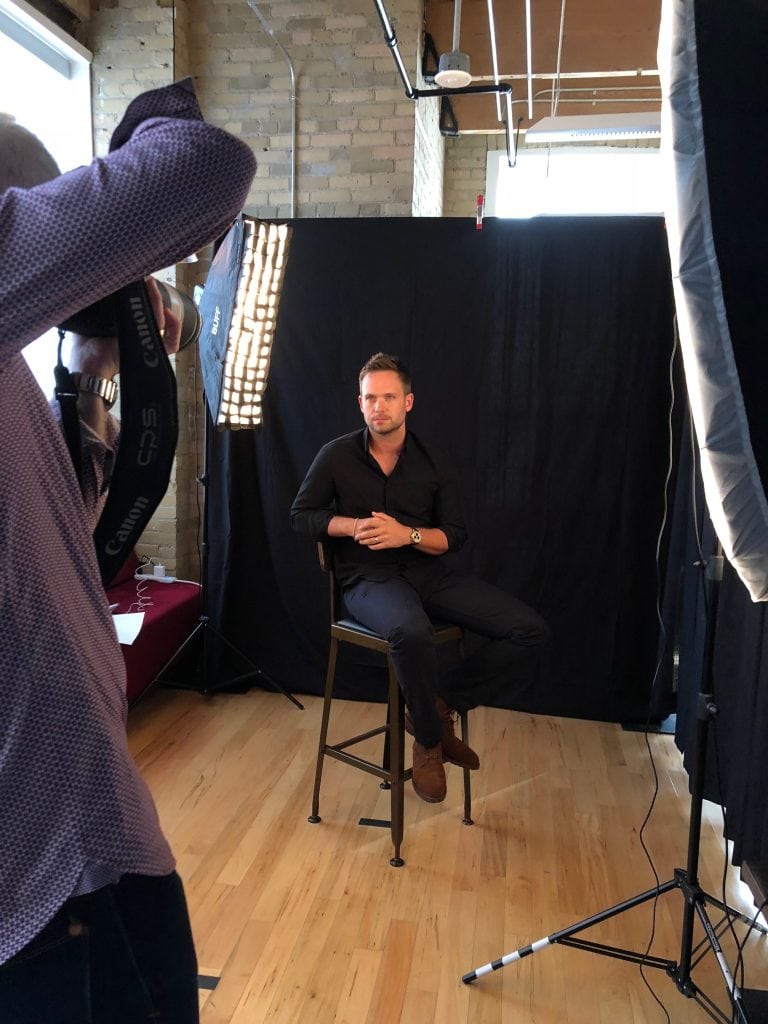 The last, but perhaps the most exciting day of The 2018 ITHouse x Producers Ball!

The morning began with the amazing Patrick J. Adams! His kindness and passion for photography showed as he switched roles with our Rolling Stone photographer to test out his equipment. He was enthralled by the set-up the photographer had going on and was intrigued to learn more!

It was a busy morning and the charming Dermot Mulroney was spotted on the luxurious leather couches enjoying a Tim Horton’s black coffee. He shared that he looks forward to the Sour Cream Glazed doughnuts at Tim Horton’s when he visits Canada!

The final day centred around Swarovski’s panel on Fashion in Film with fashion gurus, Annette Ryan, Shohreh Aghdashloo, Michelle Lyte, and Bronwyn Cosgrave, as our panellists. Moderated by the ELLE Canada Editor- in- Chief, the panel explored the most memorable fashion moments in film history and the power of the right wardrobe. Shohreh Aghdashloo shared her wisdom on the subject when saying that not only does good fashion matter in a movie, but so does music! Both art forms coming together is so powerful in creating impactful and beautiful narratives.

What was your highlight of TIFF this year? Tweet us (@NatashaNKPR and @ProducersBall) and let us know!