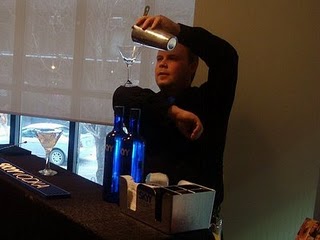 SKYY Vodka Helped You Choose: Is He Into You? Or Is He Just Not That Into You?

Guests enjoyed the mixing talents of SKYY bartender, Matt Jones, chose their favorite sips, and were treated to a tarot card reading to find out what their romantic future has in store…

SKYY Vodka is produced with a unique four-column distillation and triple-filtration process, as well as a reverse-osmosis process to create a smooth, clean taste. SKYY strongly supports film and was previously the official spirits sponsor and promotional partner for the movie, Sex and the City in Canada.

So, is he into you or not? Try these delicious movie-inspired recipes and decide!

Directions: Pour SKYY Vodka and pineapple juice into shaker. Shake vigorously. Pour into chilled martini glass. Top off with a swirl of Chambord.

he’s just not that into you

Directions: Pour SKYY Vodka and lemonade into shaker. Shake vigorously. Pour into chilled martini glass. Top off with a swirl of Blue Curaçao.