For the past few months, Jack Daniel’s JD Supporting Act has been making musical dreams come to life for young artists across Canada. The calibre of talent and the love for music in our country is nothing short of incredible (can we talk about Alanis Morisette at the Junos, anyone?).

In Jack Daniel’s Supporting Act’s inaugural year, over 65 Canadian artists shared their musically-driven stories in a short 60-second video outlining what they need to make their dreams a reality. Over the course of 16 weeks, the contestants were narrowed down by a panel of judges and one artist was chosen every two weeks winning everything from electronic drum sets to touring the UK! Now you have the chance to be a part of someone’s musical journey to stardom!

This week it’s up to you to vote on the finalists to decide who will be receiving the JD Supporting Act Fan Choice Award! From March 13-25 your votes will decide who the final winner is! 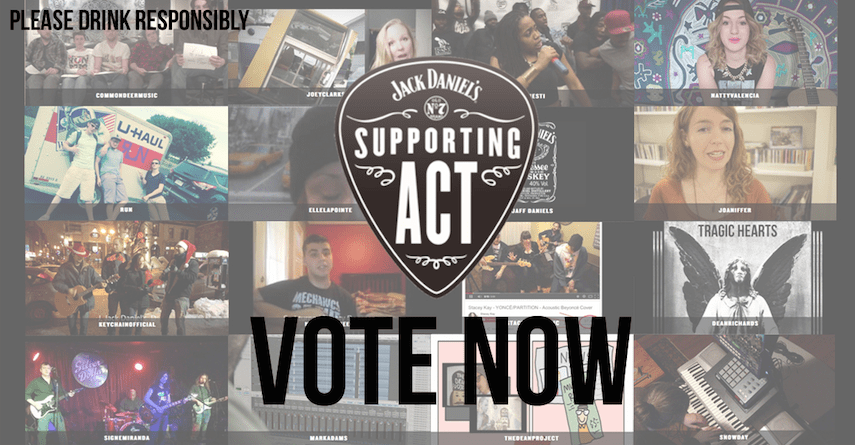 Winner 2: Kink the Band – The duo, who strives to promote female empowerment in rock and roll, won funds to record their first album with local Toronto producer Jason Pierce.

Winner 4: Stone Iris – After winning Indie Week Canada, the band from Alberta had the opportunity to play Indie Week UK. Jack Daniel’s gave them the means to tour the UK before their headlining experience.

Winner 6: Bathurst Station – The up and coming Toronto band was the second to win an opportunity to tour the UK.

Winner 7: The Elwins – Hailing from Keswick, Ontario, this group of long-time friends received funds to purchase new instruments to complete their world-wide tour, aiming to sound better than ever on stage.

Which musical act is your favourite? Tweet us at @NatashaNKPR!